I’m sitting at the breakfast bar, clutching the mimosa my sister has just poured like it’s my only road out of here. Mum’s making coffee, my other sister is flipping pancakes, and Dad’s outside at the barbeque, tending to the bacon. “I just think that women whose marriages end,” Mum is saying, “and they get into a relationship with a woman … they’re just looking for companionship. Not a relationship.”

It is before 10am, Christmas morning, 2017. I’ve driven to Mum and Dad’s from the house where I’m cat- and chicken-sitting, which has unvacuumable shaggy carpet and mould on the walls of the room I’m staying in. I’ve been couch surfing and house sitting, never in the same place for more than a week, since the middle of October, when I left my husband. He gets to stay in the apartment we lived in because I hated living there and his parents own it, and I’m not mentioning to my workmates that I’m commuting to work from all over Auckland because I am, as I’ve come to call it, ‘technically homeless’.

In the middle of December, my husband phoned me, as a courtesy, to tell me that he was seeing someone. I cried, even though I was the one who left him. It seemed unfair that I was the one who had fallen out of love and he was the one who found it again so quickly. He’d been on this new thing called Tinder, which neither of us had tried before because it was invented while we were together. I downloaded it and plugged in my information: Grace, 28, woman. The next screen had a simple question, with two possible answers: Men. Women. I got up from my grandmother’s old couch very quickly and began pacing around my parents’ granny flat, where I was staying that week. Two possible answers. Two checkboxes. And until I was staring at a selectable option, the possibility had never occurred to me. I didn’t have to date men. I could date women.

Two days before Christmas 2017, I went on a date with a woman for the first time. I didn’t tell anyone. I was twenty-eight, and I felt like a naïve child. I was planted on a fundamental and destructive and ongoing earthquake, but only I could feel it.

I down my Christmas mimosa and brace myself for the rest of the day. Later, back at the gritty-carpeted housesit, I play out a conversation in which I scream at Mum that she’s talking about me. But this isn’t the time. The earthquake is still rolling, and I don’t want to tell anyone what’s happening to me until it settles.

I looked forward to childhood Christmases, as most unjaded children do, but my keenest Christmas memories are overwhelmingly negative: realising, surrounded by a storm of spent paper, that my Santa Sack was empty. Crying on my grandmother’s knee after giving myself a blood blister on a nutcracker. Losing at Monopoly. The deeply weird and unexplainable feelings I got watching Oliver! which always played on Christmas Day. Despite this, in my childhood and teenage years, I continued looking forward to Christmas, year on year, and I continued being disappointed by Christmas, year on year. As I grew older, this disappointment focused from the general to the bitter and specific: I had no one to bring to Christmas. Even Mum deciding she wasn’t cooking a roast lunch ever again, and from now on we were having an easy brunch for Christmas, wasn’t enough de-ritualising to take away the nagging feeling that I was proving myself the least successful sister each year I didn’t bring someone home for Christmas.

Every Christmas, Dad succeeds in taking a truly awful photo of us around the brunch table. Inevitably, someone’s eyes are half-shut, someone has a mouthful of food, someone isn’t looking at the camera, and the whole thing is slightly out of focus. But these photos show the shifting tides of people in my sisters’ lives who joined us for Christmas: their teenage boyfriends, then fiancés, then husbands. In our late teens and early twenties, Christmas afternoons became a weird nothingness as my sisters went to their in-laws’ lunches and dinners. Each year I was falling further behind them—younger, lonelier. My sisters and I were even only in the number of Kobo ebook gift cards we ended the day with.

In mid-2012, I started dating the guy from my creative writing tutorial with the leather jacket and no social media. I had found someone to date me, to make me on par with my sisters, to occupy the seat next to me at family Christmas. Everything was coming up Grace.

He isn’t in the 2012 Christmas photo. When we got past three months, the relationship longevity record set by my fourth form boyfriend, I had started getting excited about him being there as we hoed into our Christmas pancakes—but he was out of town with his family. He’s missing from the 2013 photo too. He stayed in Auckland this time but had a stomach ache on Christmas morning and didn’t come over to my parents’. “I just thought this year was going to be different,” I said petulantly to my mother, like a child without enough toys once all the presents were opened. But in the next two Christmas photos, I’m golden. I have someone by my side—as my fiance in 2014, and as my husband in 2015. In the 2015 photo, I’m serving food onto my grandmother’s plate, an oxygen tube visible under her nose, the tank just out of frame. In 2016, she’s not there. We’re all somehow smiling in the photo, but the smiles seem forced. There are three bunches of white condolence flowers in the background of the picture.

In the 2017 Christmas photo, I look manic. My eyes are open too wide and I’m smiling a pasted-on, crooked smile. I have a secret that feels like it’s buzzing just beneath my skin, visible to anyone who cares to look closely enough. I’m undergoing an earthquake. My mother has opined on women who leave their husbands. And alongside this, we’re all collectively figuring out, for the second year, how Christmas works without my grandmother, the anniversary of her death still raw and feverish.

I made it through that Christmas without yelling at my mother or letting anyone in on my earthquake. I took my Kobo gift cards back to the house with three cats and five chickens and bought some lesbian books.

I ended up coming out a few months later, at Easter, but for some reason, it isn’t the yearly passing of Easter that reminds me that I absolutely fucked myself over by not realising I’m gay until I was twenty-eight. Everything restarted that summer—I left my relationship, moved out of the house, realised I was gay and resigned from my job to start a new one. It’s like I had that chance people long for, to hit the great big restart button, except I had to carry all my baggage with me through the threshold from my old life into the new one.

It would be such a wonderful conclusion to this traverse through Christmases past if I immediately found the queer love of my life, who has sat by my side loading pancakes onto their plate each Christmas since, caught shoving a forkful of scrambled egg in their mouth in Dad’s photo. Life isn’t so fortuitous. I haven’t brought anyone to Christmas brunch since those golden years with my ex-husband. I haven’t had to split Christmas day between my family and my in-laws. I haven’t had to put anyone through the ordeal of Dad’s annual photo.

But I’m also not annually disappointed the way I used to be. Or rather, I anticipate and prepare for the disappointment, and then it doesn’t hit so hard. I allow myself to do what I want on the day—go home to read my Christmas book, and to see my friends who host a lunch for those wanting to get away from it all. I visit the shaded garden where we scattered my grandmother’s ashes, maybe write a poem amongst the leaves and mosquitoes. I take it slow and treat it as close to a normal day as I can—just one where I have brunch with my family and watch my niece and nephews open presents.

And I stay positive: at least I will almost certainly walk away from it with more than one Kobo gift card. 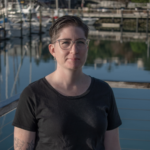 Grace Shelley is a writer and teacher from Tāmaki Makaurau. She edits Overcom, a literary journal which publishes work by queer writers and artists. Her writing has been published in Mayhem, Milly Magazine, and Tarot.