I wasn’t particularly prepared to meet myself in parallel but I don’t think anyone would be. My friends had told me, in the months prior, of spotting my double round town. I had put it down to chance and my unfortunate tendency to dress like a nonbinary-bisexual cliché; off-hand, I could easily rattle off a list of queers around Tāmaki with thick thighs, a predilection for band shirts and hair colour that varied month-upon-month. I had done some cursory googling about what it meant to see your doppelganger, because I was bored on the bus one time, and hadn’t gotten much further than the first page: a plethora of warnings that a doppelganger appearing was an ill portent.

Then there was the classic hypothetical, that I’d often introduced when conversation at parties got boring: asking someone if they’d fuck themselves from another universe. There’s enough precedent from TV and movies now without that seeming like a totally bizarre prompt – or, at least, that’s what I told myself. I used to think it meant a lot about a person; that it was a perfect way to gauge how they oriented themselves in the world, and whether or not they had low self-esteem. All this preamble to say: I thought I knew myself, and my definitive answer to that crucial question.

I’m trying to parse out my memory (which is unreliable at best), to present a coherent narrative. Not to mention it would be great short-story content, if I could get my story straight. The reality is, I had been presented with every narcissist’s wet-dream. So, it’s not surprising that we both failed to establish the how of it all – it wasn’t either of our (my) first priorities. When our eyes met in the mirror of the public bathrooms under SkyCity, we had a brief moment of side-eyeing each other shyly. But ultimately, we stepped out separately and didn’t have much to say. How do you tell a stranger: I think we are the same thing.

In the end, it was quickly established we were enough the same to routinely visit my (our) usual inner-city haunts (a favourite café, a route of second-hand bookshops in easy walking distance). They were bolder than I, and straight-up called me out on the uncanny resemblance one day; I suppose the fact that we were reaching for the same book helped. Both being connoisseurs of science-fiction, we knew to outline ground rules pretty quickly: no talking of our day-to-day lives, where we lived, who we dated or the like. It was fun, because of course it was, but neither of us were ready to establish just how we came to be, let alone what the fact of our being meant. Besides, how would I (unscientific as I was) have any clue as to how my doppelganger had breached into my reality?

So: we got a hotel room.

There was the precursory comparison of key features; I already knew it was me, because I’ve never met anyone else with such impeccable taste. But it was a knowing all-over-again when we compared the weird bruise-like birthmark on our (my) ass, and the bizarre bone growth on my (our) toe. While toeing (hah) our ground rules, we established our key physical differences. These largely stemmed from me quiet-quitting testosterone, whereas they’d kept true to a future self, more masculine than I’d let myself envisage. They even stuck at it long enough for top surgery, and we held a brief moment’s silence for how great their tits had been.

I don’t really know what to tell you from here. How do you think this story ends?

There’s a script here that I’m unsure how to follow through on: we got a hotel room. We examined each other’s bodies and it wasn’t entirely in the spirit of scientific discovery. What do you think happened, really?

I don’t want to give myself away, reveal these parts hidden to everyone but myself. But what I will say is: I love my life. I love my friends. I love myself. But their existence threatened all that. Yes, we didn’t know the scientific basis for what was happening but, when you’re living life in duplicate, it doesn’t seem good. You can run endless hypotheticals, contemplate what you’d do when faced with an absolute and devastatingly handsome existential threat. But you never really know. So: we got a hotel room. Afterwards, I walked out, alone. That’s where this narrative ends.

And then, you entered stage right: my triplicate. 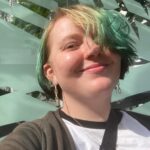 When people ask Elise what they do, they usually say “not much”. In their free time, they are a SFF devotee, who only writes poetry when their feelings get too big to be dissipated by a walk to their local library. They can be found lurking online in their personal internet cesspool at @moraltoilet.