Out of the Ashes

In lots of ways, 2022 has been weird. Plenty of us have been struggling with the mental fatigue of being in the third year of a pandemic that hasn’t ended but which we’re now allowed to ignore, at least officially. Tiring things have also been eager to prove they can happen without COVID’s help, including Charles being crowned king and Harry Styles saying that the new film he is in “feels like a movie” (will someone please think of Gemma Chan!).

That’s what made going along to ‘Out of the Ashes: Celebrating Queer Histories’ at the National Library on Thursday evening quite wonderful—while there was a complex mix of feelings in the air at the event, the resounding one that I could feel was joy. It was a chance for Aotearoa’s queer community to rest and reflect on our ability not just to survive but to live, and to live well.

The event marked three anniversaries and a zine launch: the founding of the Dorian Society, New Zealand’s first formal gay organisation, in 1962; the formation of Gay Liberation Front groups across the country in 1972; the establishment of the Lesbian and Gay Archives of New Zealand Te Pūranga Takatāpui o Aotearoa (LAGANZ) as a trust in 1992; and the launch of the third edition of The Archive is Alive, a zine series celebrating the history that lives on in the LAGANZ archives, which are housed in the Alexander Turnbull collections at the National Library.

We were a colourful bunch, congregating in the foyer outside the library’s main auditorium at 5:30—literally, because there was at least one person wandering around draped in a rainbow flag. We ranged quite a bit in age, which reminded me of how important intergenerational solidarity is to queer people. As we’ve fought to live lives free of harassment and fear, we look back, and forward, to see what queer experience has meant in different moments of what we hope will be and yet are cautious about the likelihood of being a linear arc towards liberation.

Two display cases had been set up in the foyer to showcase some of the material in the LAGANZ archives. Your eyes couldn’t help but be immediately drawn to a stack of charred papers in the middle of one of the displays, living proof of the arson attack carried out on Wellington’s Lesbian and Gay Rights Resource Centre (LAGANZ’s predecessor) shortly after the passing of Homosexual Law Reform in 1986. No one was in any doubt then or now that this had been an act of violence; one of the speakers for the evening, LAGANZ curator Linda Evans, showed in her presentation a photograph taken just after the fire of the word FAG scrawled on the centre’s floorboards.

There were photos in the display cases of trans pioneers Carmen Rupe and Chrissy Witoko, to whom so much of the vibrancy of Pōneke’s gay and trans scene in the second half of the last century is owed. There were copies of zines and resource booklets that had been published within the last couple of years because our history isn’t something that sits sealed off from who we are now; the archive grows every day as queer activism and brilliance continue. My favourite artifact was a badge that proclaimed SEXUAL DEVIATION IS THE MAINSPRING OF EVOLUTION—too right, and a wry spin on the event’s theme of growth following destruction in some ways.

It was lovely to see how packed the downstairs auditorium was when it came time for the talks and performances. No less than two of the five non-binary elders I’d interviewed for my MA thesis were there. There was nary a normal haircut to be seen.

Grief was expressed in some of the words and images shared. These were moments for contemplation and sometimes felt like they were given to us as a means of necessary catharsis. Ben Black, Rainbow Youth’s Bay of Plenty regional manager, talked about Googling “what to do after a fire” when the emotional impact of Tauranga’s RainbowYouth building having burnt down in a targeted attack earlier this year began to hit. It felt like there was some weird wormhole link from 2022 back to the ‘80s and to an incredible black-and-white photograph we were shown of curator Phil Parkinson in profile, staring down at what the flames hadn’t managed to take, in late 1986. Activist Sandy Gauntlett’s call to us not to let anyone get left behind—ever—was given alongside anecdotes of personal anguish but also of the love shared among their whāngai’d family. Chris Szekely reminded us of the pain of pathologising myths by sharing a memory of his aunt answering the door to a Salvation Army doorknocker and signing a petition against Homosexual Law Reform because while she didn’t mind “it” she didn’t want “it” to spread.

There was just too much joy in the room, though, for anyone to be left with anything other than the idea that New Zealand’s queer history is a history worth celebrating. Gay lib campaigner Gavin Young brought us back through photographs to the locales and flats in Pōneke where the idea for the Dorian Society had been born; I think I appreciated this especially because I’ve had to try to find my feet in this city this year after moving down from Tāmaki Makaurau and knowing where I might find traces of the pride of my queer forebears helps with that.

I have to give a massive tautoko to Will Hansen, my friend and officemate at uni, who as a LAGANZ trustee has spearheaded the Archive is Alive zine initiative. Will cares about trans and queer history more than anyone I know and his enthusiasm for the knowledge that lies within the archives and in queer communities themselves is genuinely nourishing. It’s thanks to people like Will that high-school-age queer folk like Sage and Nico, who spoke about their contributions to The Archive is Alive Volume 3, can locate themselves within a legacy of people in New Zealand who both make and record queer history. I hope that by the time this has been published you have had a relaxing weekend, Will—you deserve it!!

The most significant part of the event for me was, I think, the waiata and kapa haka performances given by Tīwhanawhana, a takatāpui community group here in Wellington. These felt like a tangible reminder of tūpuna takatāpui, those who mark the beginning of the history of people with diverse sexualities and gender identities in this country. Dr Elizabeth Kerekere, herself a member of Tīwhanawhana, offered a note of explanation to the waiata performed, and I hope I can correctly paraphrase her commentary on the first—this waiata was a song of return, whose significance to the group was that in connecting with takatāpuitanga a connection with those tūpuna takatāpui could be made, a return to the knowledge of who those tūpuna were and what being takatāpui looked like.

When European missionaries started coming here and collecting kupu to form the first te reo Māori dictionaries, they included words that were commonly used, we were reminded. One of those words was takatāpui. It feels fitting that Out of the Ashes took place a day after the fiftieth anniversary of the handover of Ngā Tamatoa’s Māori Language Petition to Parliament. The gay liberation movement in New Zealand is generally considered to have started that same year, 1972, when University of Auckland student Ngahuia Te Awekotuku protested the US Consulate’s decision to deny her a visa on the grounds that she was a ‘deviant’. This was the spark that started off public demonstrations held by the newly formed Gay Liberation Front, best remembered today in images of the group holding up banners near Albert Park’s bronze Queen Victoria statue with messages including “Will Victorian morality ever die?”.

Takatāpui have been at the forefront of the struggle for queer liberation in Aotearoa; Sandy Gauntlett (who is themself takatāpui) made me consider again how integral oral history is to communicating the story of our community’s struggle in their comment that they remembered a gay lib group meeting on campus up to three years earlier than Ngahuia’s protest (they recalled this because they’d done drag performances to help with fundraising).

Big props to Kevin Haunui, LAGANZ chair, for getting in a MasterChef reference at the end there—just like Jock on the show does a big roar of a send-off in telling the other contestants to give it up for whoever’s being eliminated, we were encouraged to homai te pakipaki for all the speakers and performers (including two stunning drag performances!). My friend who joined me at the event on Thursday will confirm that I was VERY excited to hear a mention of this particular reality TV show, as I’ve been binging it in my downtime when I haven’t been gritting my teeth and getting on to drafting my history thesis. I’m writing about nonbinary history in Aotearoa, though, so in some small way, you could say that this sometimes rather silly Australian cooking show is now part of the recording of our community’s histories, right?It was nice to have a moment like that to laugh if I’m being honest. Finding joy as a queer person, and as a trans person, is a really precious thing. That’s why I’m so glad that’s what Out of the Ashes was all about. Here I’m reminded of a GIF one of my fellow transmascs likes to send me on Messenger when I share a piece of good news—it’s of a moment from Keeping Up With the Kardashians where Kim says, “It’s what she deserves.”

The following poem by Luv, reproduced here with permission, is featured in The Archive is Alive Vol. 3 and was included at the end of the event programme. 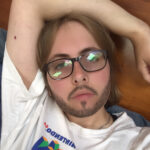 Erin Ramsay (pictured here in digital drag) is a Pākehā writer, trans historian and aspiring digital artist. She has recently relocated from Tāmaki Makaurau to Pōneke to undertake an MA in History at Te Herenga Waka—Victoria University of Wellington looking at the origins of non-binary gender identities in Aotearoa. Erin writes poetry and prose inspired by her experiences of queerness and sensory sensitivity.