Beyond the Proscenium Arch

How Sam Brooks is grounding theatre in … an office?

“How do we get upstairs?” we ask, as we try to navigate the Spinoff offices in Morningside. By we, I mean myself and Nicola Kawana, seeing our destination from below. A beaming Michael Trigg shows us the way, leading us into the old local board building, a beautiful beast, complete with candy-floss pink detailing along the ceiling. I am here to witness a reading of one of Sam Brooks’s new plays, distinctly an altogether different experience from a live production, but one with its own charm. Sam Brooks, of course, is one of New Zealand’s most prolific young dramatists. His list of published works is almost as long as the list of awards he has won. An overachiever through and through, the Toi Whakaari alum was awarded the Bruce Mason Playwriting Award in 2016, one of the foremost prizes in New Zealand theatre. This particular play, Leaning Left, was a finalist for the 2022 Adam NZ Play Awards, along with White Wedding and The Perfect Image. Yes, Brooks had three plays named as finalists for this prestigious award, showing how adept he is at his craft.

Brooks greets me in his glossy red boots, which immediately catch my eye. Voices echo around the big empty room, concrete walls and high ceilings. Sam places a cheeseboard on the table and invites us over to grab a drink. Being a non-drinker, I am pleased with my soda water with a twist of lemon, and once we take our seats, Brooks introduces the concept for this series of readings.

Leaning Left is part of a broader series of readings, bringing theatre into spaces that it perhaps does not usually penetrate. In this case, an old government building, now the office of a growing media enterprise, serves as the backdrop to perhaps a fitting play, one about a PR specialist entangled in the world of politics through his ex-lover. It goes without saying that the script itself is phenomenal, with Brooks’s characteristic wit bundled with equally verbose characters. It is refreshing to see a queer rom-com that does not end in absolute tragedy, that doesn’t take itself too seriously, but rather captures the sass, callousness, and manoeuvring of the political sphere colliding with the tenderness of a genuine love story, and the comedy that this juxtaposition demands.

Script readings are very different to full theatrical productions. Being a screenwriter, I am well versed in the value and purpose of readings – for the writer to hear their work out loud, to reflect critically on the text, to seek feedback from those in attendance and from those reading, and to get a sense of the shifts in energy in the room. During lockdown, I attended many readings over Zoom, which has its own digital quirks, like muted microphones and spotty Wi-Fi connections. It became almost comical at times waiting for someone to say their line, only to realise that they had dropped out of the call and were sitting in the waiting room trying to reconnect. A live script reading is, of course, preferable to the Zoom iteration. Firstly, the energy of the actors being in the same physical space was remarkable to witness. They turned towards and away from each other, read each other’s facial expressions, talked over and interrupted each other. It felt like theatre without the kerfuffle. Secondly, the reactions from the audience were vocal, physical, and embodied. A slight shift in posture speaks volumes. I have no doubt Brooks was attentive to our every move noting every laugh ranging from polite chuckle to raucous guffaw.

I must acknowledge that the acting talent was everything a writer could wish for. Nicola Kawana and Michael Trigg were joined by Tim Carlsen, Jake Pitcher and Renaye Tamati. The charisma oozed out of them and it really enhanced the experience. Trigg’s embodiment of the fast-talking, sass-lord PR consultant was particularly exceptional, and resembled someone I know in real life so closely it could have been a character study. Tamati brought the invisible lines between the dialogue to life with the greatest array of facial expressions that would otherwise have been lost had this not been a live reading.

Another aspect of live readings that perhaps goes unspoken is the way that they bring together a creative community in an informal way, in a social way. Although I stepped into the room only knowing one person, I came out of it having expanded my network through the very simple question – “So, how do you know Sam?” Perhaps it was the intimate group size, or perhaps it was the wine and cheese, but entering these informal spaces has a profound way of bringing about collaboration, first through engaging with the work at hand, and then by exploring the creative threads that stem from this work. As someone who feels like an outsider in the art world (we love imposter syndrome), it was beautiful being welcomed into this community as an equal.

Leaning Left was a reminder that script readings are a low-cost way of bringing theatre into non-theatre spaces, eschewing the proscenium arch in exchange for wine, cheese and companionship. Perhaps this series of readings do not only exhibit Brooks’s writing prowess. Perhaps it speaks of broader movements within the theatre world to embrace flexibility in a volatile mid-COVID world. A charming, witty, pointed play, complete with laughter and audible gasps, twists and turns, the flicking of script pages, office alarms, inaccessible toilets, and government chic ceiling details – however lofty the characters may be, deep down they are simply human, and perhaps this space reflects that humanity with all of its imperfections, a far cry from the pretentious grandeur of traditional theatre spaces. Perhaps we are witnessing a democratisation of the art world, a return to its origins, its informality, its flexibility, its accessibility. Nonetheless, this was an enjoyable experience and hopefully a sign that community-building through play readings will become a mainstay of Auckland’s growing theatre scene. 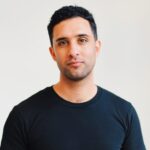 Alex de Vries (he/him) is a queer Afro-Kiwi writer based in Tāmaki Makaurau. His writing is unapologetically black, queer and irreverent. He recently completed his Master of Creative Practice in Screenwriting, researching black representation and black diasporic cinema in a New Zealand context. His short screenplay Coloured Less recently won Best Student Short Screenplay at the Vision Feast Film Festival 2022. He has a keen interest in identity re/construction and decolonisation, as well as a love for the whimsical, the mischievous and the absurd.