What We Do in the Morbius

Morbin' Time, Morbius, vampires, What We Do in the Shadows

“Do you think we have a bit of a sexism problem?” Bella Swan nudged Nadja in the ribs. The whispering was a bit pointless, because every vampire in the International Vampire Council could definitely hear them, but also none of them were paying attention, too busy squabbling. It was business as usual. “And also maybe a race one?”

Nadja cast her gaze around the room. Yeah. It was hard to miss. The sheer bulk of the room was … predominantly made up of white guys with brown hair and beards. Even her darling Laszlo was part of that category, though he did compensate for it by actually having a personality. She shrugged. “People think of vampires, they think “ooh scary white guy” and don’t get past it. Can’t think why.”

“Yeah …” Bella sighed. She sipped at her bloody Capri-Sun, thoughtfully. “It’s not that I’m complaining, I just want to …”

“Be listened to?” Yeah. Nadja got that bit.

“Actually I want to go and live in a ditch for a bit and become feral and feel validated by my choices, but I can’t do that either! We’ve all got their standards to live up to.” Bella waved her Capri-Sun at Dracula’s wives, who maybe did have names but she didn’t know them, over in the corner.

They were waifish, with glorious cheekboney faces and blood all over their long white shifts – intertwined together, laughing beautifully. She kind of hated them. “No one wants feral vampire women. We just have to be hot.”

“Eh.” Nadja shrugged. She didn’t really have a problem with Sophie, Alex or Georgia, who definitely all had developed and well-thought-out personalities, though she envied their ability to get blood out of their clothing. “Fuck them.”

“I don’t want to fuck them-” Bella replied, having clearly gotten the wrong end of the stick, “I just want-” But then she stopped as a stranger walked in through the doors at the end of the room.. “Huh.” She said, chewing on the end of her straw. “Who’s the new guy?”

He, like most of the others, was a white guy. Long hair, red eyes, cult leader-like vibes. He also wore the ceremonial robes and overly large fake teeth of the … Leader of the International Vampire Council.

“Wasn’t the leader like … Dracula, last week?” Bella muttered to Nadja, under her breath. “What happened to him?”

“Maybe he died.” Nadja said. She wasn’t too sad. Dracula – the original one, because there were multiple – was kind of a creep. “Sad.”

The stranger raised his arms in the air, and yelled, “Dracula is dead! Long live Doctor Michael Morbius!”

It was all a bit slurred because of the ceremonial teeth that stuck out from his mouth, like an ill-fitting mouthguard.

Well, Bella thought, furrowing her brow. That was new.

Doctor Michael Morbius was, in all honesty, anxious about becoming the Leader of the International Vampire Council. Not because he was scared, fuck no, he wasn’t – he was one of the most powerful vampires in the world and he had a sick cape – but because of the amount of admin involved. If there was one thing he wasn’t great at, it was well-reasoned and positive conflict resolution.

But he’d killed Dracula, mostly on purpose, so Leader he’d become. Besides, it couldn’t be that bad. A series of the most powerful vampires in the world under his command? He’d be ruling the fucking world by the end of the week.

As he scanned the room, however, he didn’t really feel all that convinced. Where was the power? Where was the bloodlust? He mostly saw ruffled fabrics and mustiness. Vampirism, he thought, was clearly an art to these people.

Vampirism was a science. He’d just have to instruct them as such.

“Tha- -oo- for-” He frowned and popped the ceremonial fangs from his mouth. His own fangs were fantastically long and perfectly serviceable, actually. “Thank you for welcoming me into your Council. I know the loss of my predecessor was probably rather unexpected-”

“We were rather hoping that someone would end Dracula’s death before the year ran out.” A soft-spoken, blonde vampire piped up from the corner. He sliced the neck of a rat and squeezed the blood into an ornate, cut crystal glass. “Though I had hoped it would be Laszlo.”

“Aw, thanks, chum.” Laszlo was brunet, bearded, and broad. His accent was probably from the UK, though Morbius didn’t put much thought into such places. He winked at Morbius and said, “Not my doing but there’s still time, isn’t there, Doctor Montevarious?”

Well, he couldn’t outline his plans of world domination without a few introductions, so they went around the room saying their names. There was a completely hairless person with very expressive claws; and also a ginger werewolf.

“He’s my boyfriend.” Another vampire, this one with an accent Morbius really couldn’t place, said. His words had the impression of “If you complain I’ll fucking kill you,” so Morbius decided to leave it.

When they’d all gone around, Morbius clapped his hands together and began to explain his plans. He got through maybe a paragraph, talking about gene expansion and evolution and biology when the whole room erupted in jeers.

“I was turned into a vampire after a night in town in 1654.” Viago beamed. “It was actually almost romantic. What science is there about that?”

“Well, it’s a biological per-” Morbius started, but was cut off.

“Vampirism was my saviour from a life of endless melancholy.” The soft-spoken one – Lee-start? Laverne? Something like that – added.

“Yes, and-” Morbius got interrupted again and again, to the point where everyone was squabbling. “Please!” No one listened to him.

“Actually.” One of the vampires said. He was, reassuringly, American. “I think Doctor Mountainous might have a point. About the scientific aspect.”

The room fell silent for a second. Laszlo leaned over the table and jabbed a finger at the man. “You sparkle in the sunlight, Edward!”

“It’s an evolutionary trait!” Edward, if he bled, probably would have been blushing.

“Yeah, it’s an evolutionary fuck off.” Laszlo replied. He waved a hand at Morbius, and then rose from the table, heading towards the door. “You. Melodious. Come with.”

“Yeah, don’t care.” Laszlo wandered out of the room.

Morbius, noticing that the vampires were glaring at him, picked up his robes and shuffled from the room.

Laszlo led him to a library, piled high with books. His presence seemed to take up the entire room, all-encompassing and not all that welcoming. He didn’t look impressed. “You’ve really got balls coming in here and talking like that.”

“Wasn’t a compliment.” He folded his arms. “You know why I became a vampire?”

“I became a vampire because I thought it would be fun.” He leaned back against a chair, “and y’know what? It’s been fun. You trying to figure us all out?” Laszlo shook his head. “What’s the fucking point?”

That, somehow, was the first real thing he’d felt out of any of the Council. Some kind of want. That was exactly what he needed, an in. Morbius smirked, tilting his head. “That’s it. You get it. You understand what it’s like. I need to understand too.”

Laszlo scoffed, contempt obvious on his face. “Don’t try and pretend we’re the same, Melancholious. Go out and fuck something, throw yourself off a building or drain someone. Then you might get it.” He turned towards the door. “You’re gonna be a shit leader. Worse than Dracula.”

“You are.” Laszlo was grinning, a devious look in his eyes. Clearly, this was all a joke to him. “Are you enjoying this little tête-à-tête? Does it make you feel things, Dr Magnolia?”

“That’s a stretch.” He shoved Laszlo, pushing him across the room and into a pile of books. “Fuck you.”

“Touchy.” Laszlo stood, brushing off his coat. “Can’t be a leader with emotional control like that. Some of us have actually been vampires longer than a week.”

“You think you should run the Vampire Council? You?” He’d known the man less than an hour and he already knew he didn’t like him. “You’d run it into the ground.”

“Better than you.” Laszlo smirked an odd, kind of ominous thing, and pushed him with one fingertip.

Morbius fell across the room and landed in a crate marked ‘Return Here. (Seriously guys, you’ve got to bring them back).‘ He climbed out of the box, suddenly pissed. It was one thing to be humiliated in front of a room full of strangers, but it was worse in a library – he’d never live it down.

They met in the centre of the room, fighting ridiculously. Laszlo fought like nothing he’d ever seen, fast, but with a ridiculous flourish, sweeping his jacket about him as he did.

It was genuinely the most annoying thing he’d ever seen.

“What the fuck.” Morbius breathed, as the other vampire somehow managed to outwit him for the second time in two seconds, darting around a crate, up along a stack of shelves and along one of the walls. “What the fuck.”

“Too slow, Moronius.” Laszlo sang and perched on one of the shelves. He thumbed through one of the books for a second, then tossed it to the side, looking bored. “Really. There’s no good pornography in this place these days.”

Morbius threw himself against the shelf Laszlo was sitting on, knocking him to the floor and sending books flying. There was a violent, inevitable crash. Dust hung in the air, alongside a few spiders.

A lot of silence.

He headed for the door. Good riddance.

He didn’t even feel the shove until he was flat on his back against the floor, and ouch- that one actually stung. It might have been the piece of wooden bookcase Laszlo had stabbed him with, right into the flat of his palm. “What the hell, did you try to stake me?”

“If I tried to stake you you’d already be dead.” Laszlo said, from on top of him. “Either you step down nicely or I do.”

But there was something in it, actually, in the feel of the other vampire on top of him. Something.. worth exploring. Vampirism. It had its perks. Slyly, he asked, “And what if I don’t?”

“Were you not listening-” Laszlo said, then seemed to actually get it, the line of their bodies together. “Oh. I see.” He cocked an eyebrow, almost incredulously. “You’ve been pushing me this entire time.”

“Playing both sides so that I always come out on top.” It was a skill of his. “Don’t feel bad.”

It was funny. Making out with another vampire in the ruins of a library felt sacrilegious, in more ways than one.

But, it felt like an appropriate introduction to the Vampire Council. An initiation, maybe.

He just was thankful that he wasn’t wearing the fucking ceremonial teeth.

Afterwards, once they’d come to a … decision, Laszlo kneed him in the thigh, all pliable and disgusting, and said, “You know, ‘getting the morbs’ was slang for being sad back in my day, Morbius.”

“Yeah. Don’t get used to it. I still fucking hate you.”

Which yeah, he got.

Co-leader of the Vampire Council.

It nearly had a ring to it. 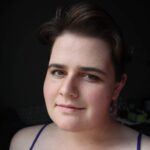 Emma is a theatremaker and dancer based in Pōneke. Emma’s previous work includes DETECTED! – street improv theatre, Declarations of Love – a rom-com satire and Witches B*tches – an improvised supernatural talk show; alongside a boatload of fanfiction, which you can read here: https://archiveofourown.org/users/Skyuni123/works