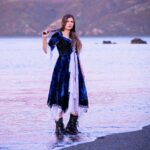 Rebecca Hawkes
Rebecca Hawkes is a Pōneke-based Pākehā poet and painter from a farm near Methven. Her first book, Meat Lovers, has just been shortlisted for the Laurel Prize for ecopoetry, and her chapbook Softcore coldsores can be found in AUP New Poets 5. She is a co-editor for Sweet Mammalian and the climate poetry anthology No Other Place To Stand.