Hatred For The Healer

The water rippled as its dweller heaved at the bottom of the bog. The quiet echo of rumbling from the water’s surface carried on, even after the squawking of avian creatures halted at a rustling in the dry, prickly foliage surrounding the hidden waterhole. Drops of crimson stained the sodden ground.

The closer to the water, the wetter the land became, showing shades of brown and black rather than green. Bubbles popped in the murky water as the pond’s occupant awoke in discomfort after the lullaby sung by the ‘birds’ cut off abruptly. Evening sunlight shyly filtered through perpetual pollution in the dark leaden sky, silhouetting the creature. The creature stood, short and grotesque in the pond as it saw what had caused the birds to quieten.

An approaching beast’s flank glistened with blood, oozing from the fresh gash. A backwards curled ear, small compared to the head, twitched as the beast let out a deep grunt and stomped towards the sullied water. Sticking out a long, fat snout, it waved at the water creature. A burst of hot air from the snout surprised the water creature, causing it to turn its head to the side in inspection of the newcomer.

This hidden waterhole was a healing place for the mutant, the creatures that were once called animals. Animals before the world’s previous ‘rulers’ destroyed everything. Now all misshapen from birth, they were still hunted even after the destruction.

The creatures in the trees, misshapen caricatures once known as birds, crackled another tune familiar to many of the pond’s visitors. Hopping from branch to branch, those with functioning wings flew amongst the canopy, plucking at berries of varied colour, allowing them to fall to the ground to surround the two larger creatures who faced one another. More rustling around the waterhole. The foliage along the ground parted as increasingly diverse creatures crawled, hopped, and stalked out. In cupped paws, bucket deep jaws, or loading into bodily depressions, these creatures collected the dropped ingredients and gathered them into piles on the dried mud close to the healer in the pond.

The healer beckoned its guest closer as the helpers sat back and sang with twisted associates in the trees, harmonizing with their own peculiar sounds. The song cast a trance on the visitor, giving the healer a chance to pull itself from the water and slowly shuffle to observe the gash. It smeared mud from the pond floor around the site, keeping away insects and pushing hair to the side. Turning to the pond again, it reached an appendage out to a pile of overripe berries collected by its helpers.

There was a quiet rustle not too far away, but it went unnoticed by the healer and singers. The patient’s ears twitched at the sound so foreign to the singing of the birds, bringing it quickly out of the trance. It was far too violent to be wind, and in order for the healing process to work, all residents of the pond had to be present. There was a final sound that tipped the patient off, causing the beast to bound into the healer’s pond and around the area, to find another way to escape, belting terrified cries. Amidst the squealing and concerned chattering of the small helpers, the healer finally noticed what had frightened its patient. There was a sound from the bushes. A deep, muffled breathing. But this breathing was different from any other patients the healer had tended to. The only twisted creature that made that sound while breathing was the old rulers. Before the slow creature could react, an echoing crack came from beyond the bushes and the healer was hit.

The echo of the shot was interrupted by the loud and heavy thump of the healer falling to the ground of the oasis, then a splash as it fell into its own waterhole. As the remaining creatures dashed around finding their burrows or tree stumps in frantic despair, the lone ruler let out a loud and repetitive sound familiar to the twisted birds who were now hiding amongst the leaves. They always laughed after a mighty kill. 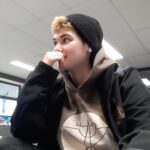 Jordan Cherian is a self-diagnosed style icon and lives vicariously through the fictional worlds they write. Studying culinary arts and encouraged to pursue writing, they strive to continue on with both passions to share the joys of their world (or worlds) with others.