not a lifestyle, poetry

This piece was originally written for Verb’s Kreutzer Sonata event (created by Sam Duckor-Jones) on 6 November 2022.

The name is the night we met—a train pulling into the station of eternal returns—its passengers in transit between the first forever and ever and a late-night phone call from the edge of goodbye. The urge to say the name out loud tugs at every loose thread until the promise of something joyous sputters to life or falls apart. Before you I would jump up on the train—and say to no one in particular—take me back home—but don’t let me leave this night alone. After you—when I look back decades later to understand how we traversed our origin and then our middle—something in me tells me we always needed night to bring us together, and that ultimately it would be night that would close us down.

The name is a meet cute turning heads everywhere it goes—a so-called forbidden attraction testing their tolerance. Our kisses multiply exponentially in response to their bared teeth—as sirens and neon signs break into daydreams we can’t hold back any longer. We learned a dance so dirty they tried to keep us hidden in the name of decency. They tell us the name we chose is immature—that it needs to learn not to go wandering out into the night with a head of wet hair. They tell us with violent outbursts that the name will summon earthquakes and plagues. When you carry a name they refuse to say or validate, you learn to keep it close to you—a talisman to help you sense danger and cruel intentions around every corner.

The name is a paper cup cradling the night—my shields lowered and defences powered down—all my past fears buried in the woods on the edge of town. I kneel to serenade the tectonic plates because only they know what it means to bear the weight of a thousand unresolved crushes—attention shifting with each awkward glance or misdirection. It took me years to learn how to say the name—how to form its comely shape without feeling ashamed about the joy it brought me—before casually slotting it into every sentence I will utter for the rest of my nights. I knew I needed the name like a composer needs a melody to follow—like a dream needs a dreamer to make it real for just a moment—enough to press itself against our wilful moods—hands in the air—glitter raining from the heavens.

The name pricks my brain again and again when I least expect it—a rose lake blooms between my ribs—a nostalgic melody nested in brand new songs—it pretends not to notice until it can blindside me in the poetry section of a bookshop—begs for my thoughts on chance and happenstance. The point at which the name meets exaltation—is where all those gut feelings pivot towards either full-throated pop songs steeped in sincerity—or grand gestures that fail to produce results—quiet like occupied graves—no innovation to lead the charge—only echoes off marble walls—all our sad histories repeating until we forget every chorus that ever made us feel alive. What I want—what will sustain me—is a chain reaction—a light beam splitting as it hits a mirrorball—eyeing up every truth and dare until I emerge through the sliding doors, happy with my fate.

The name is queer and is over begging for release—it wants everything that comes with the runaway train’s thump … thump-thump of anticipation. I said, THE NAME IS QUEER—as queer as my tongue in his mouth—as queer as poppers in a gay bathhouse—or a negroni sbagliato spilled over a crushed velvet couch. There is no mistake about the power of the name or its many costumes—in the way it can shed its skins as a defiant reveal, announcing its arrival with unapologetic abandon. Ah yes—here comes the train again—a perfect fatalist symbol—a contradiction of control and fate—a metaphor for fucking—a symbol of progress and possibility—of momentum—a track towards queer love—a radical joy—a riotous sound—a perfect pop song. Be my … be my …

Featured image by Pepperlegs366 on musescore. 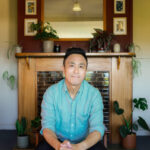 Chris Tse is the author of three poetry collections published by Auckland University Press, most recently Super Model Minority. He and Emma Barnes co-edited Out Here: An Anthology of Takatāpui and LGBTQIA+ Writers from Aotearoa (AUP, 2021). Chrs is New Zealand’s Poet Laureate for 2022-24.