not a lifestyle, review

Po’ Boys and Oysters — A Review

I first heard of Po’ Boys and Oysters in 2019, and I have been anticipating its debut ever since. I was not disappointed and you won’t be either if you get a chance to see this play.

Po’ Boys and Oysters is the first Queer Black play to debut in Tāmaki Makaurau and is presented by Black Creatives Aotearoa. Written by Estelle Chout (2021 Adam NZ Play Award finalist), who also plays the lead character Flo, the story begins in the Mission Bay home of Flo and her wife Jo (Layla Pitt). The couple is excited about the adoption of their first child, but Flo has not told her big sister Marie (Sandra Zvenyika), who has very strong opinions on everything, and invites Marie to a dinner party to reveal the news. Marie’s husband Shane (Andrew Johnson), who has Conservative politics but seems willing to listen to other perspectives, and their surprise guest Felix (Jack Briden), a young guy from Feilding, round out the cast. The interactions between the four characters are so engaging and kinetic that the 70-minute run time of the play flies by.

Be prepared to laugh out loud, because there are some big comedic moments in the play and it was great to see the audience engaged not only with the dialogue of the actors, but the nuances of their actions on stage as well. It’s because of that laughter that the moments of conflict, anger, sadness and confusion hit just as hard in Po’ Boys. Po’ Boys and Oysters put a mirror up for the audience to see conversations we have all been having in our lives about family, whakapapa, poverty, colonisation, queerness and politics. Theatre is great at letting us see and feel the human experience in a concentrated cocktail and the cocktail created by Estelle’s writing and Dione Joseph’s direction is strong. You will leave this play discussing its themes and characters well after the extraordinary cast takes the last bow. That is the true mark of a great piece of art and Po’ Boys and Oysters certainly passes that litmus test. I appreciated that every character was given an arch in the play, no one is left to be a one-note character in the dialogue crafted by Estelle and the directing choices of Dione.

Music is another important element in the production and the sound techs were seamless in their musical cues throughout the show. The team behind hair and makeup also did a great job bringing out the beauty of melanated skin, and the actors’ wardrobes were perfect for their characters. The production team poured love into this play and as we move back into enjoying the arts together after global lockdowns I look forward to what this team of artists does next.
If you haven’t been to The Basement, you will appreciate the intimacy of the space and many of us in the audience leaned forward in our seats as we felt like part of the family watching everything unfold. Black Creatives Aotearoa continues to make an impact in the arts and brings awareness to the abundant creativity of the African Diaspora in New Zealand. No matter your background you will find something to love and relate to when you watch Po’Boys and Oysters.

Tickets for the final three nights of Po’ Boys and Oysters at The Basement Theatre are available from iTicket. Catch it Thursday 6, Friday 7 or closing night Saturday 8. 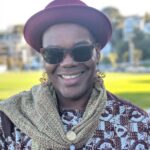 Octavius Jones is a Wellington-based PhD student, writer, poet and Afro-Futurist thinker teaching and mentoring around the world. His practice combines technology, science, academia and creative arts to tackle issues of social and environmental justice.