Trixie and Katya Live: A night of kookiness, costumes, and Klarma.

What do you get when you combine a sprinkle of red, a handful of pink, a Barbie obsession, and an untameable love of Russian gymnasts? Well, Trixie and Katya are here to show you.

Against all odds, and after a two-year wait, on Saturday the 16th of July these two kooky drag queens finally arrived in Aotearoa to perform their world tour show. Trixie and Katya Live was a drag show that had it all; aerial performance, quick-changes and reveals, choreographed numbers with backup dancers and a scene-stealing performance from Kelly Mantle, everyone’s favourite 14th alternate from Drag Race Season 6.

For many of us in the audience, this was an event that had been on the calendar (then crossed out, then rewritten, then crossed out again and rewritten again) for a long time. Understandably, then, when the two of them walked on stage, Katya in her iconic Atomic Blonde-esque bob, and Trixie in a classic white go-go boot and matching black and white dress, the crowd went wild.

I was screaming my head off, admittedly having made my way through several Gordon’s, courtesy of the TSB Arena’s premium RTD selection. (And pres at the flat beforehand. Duh. It’s a fucking drag show.) Then came, as one Twitter user called it, the “stomping bullshit”

All three of the girls, Katya in particular, seemed surprised and entertained, which only encouraged us further. Katya kept cackling maniacally, Trixie kept making jokes about the noise (“Is that a thunderstorm?”), and Kelly Mantle kept on doing whatever the hell she was doing in the most wonderful way. And we all kept on stomping. Don’t worry, we did let them keep going—but only after Trixie asked, “Will you let us do our play now, please?” Their breaking of character was charming and never derailed the show’s structure. Although, in saying that, intermission was twenty minutes later than scheduled on the program … I regret nothing.

Kelly’s performance of ‘Rose’s Turn’, well, ‘Kelly’s Turn’, was potentially my favourite moment in the show. This might indicate my age, but ‘Rose’s Turn’ really came into my life through Kurt singing it on Glee. The passion! The teenage angst! The father/son bond! I could go on. Kelly’s role as ‘Sandy’, the stressed-out and accident-prone manager for Trixie and Katya—who just wanted to put on a proper, theatrical production—was sexy, stupid, and off the rails—the perfect storm.

Other highlights of the show included:

I unironically have been listening to this track. It has recently become one of my go-to feel-good anthems, despite me knowing what none of it means.

The show was kooky, weird, ironic, self-deprecating, and self-aware, and somehow still managed to be entirely glitzy and glamorous. Only Katya could hang spreadeagle over the arena, mouth open and playing limp and dead while Bette Midler blasts, and still exude a sex appeal many would only dream of having. Only minutes after getting ‘kidnapped’ in a theatrical segment, Trixie and Katya did reveals from long, glittering pink and red dresses with matching fur coats into fringe-lined, plunging bodysuits, pulling out a tap number for the ages  (the classic reveal: a similar version seen in Barbie’s The Three Musketeers). I’ve said it before, and I’ll say it again: this show had everything.

It felt like there was room made within the show’s structure specifically for Trixie and Katya to connect with us as an individual audience. There were references to their beloved YouTube show, UNHhhh, but not to the detriment of anyone who hadn’t seen the show. They incorporated the online-shopping app Klarna, which had previously sponsored several of their videos in the UNHhhh series, into their show as the production sponsor ‘Klarma’, making fun of their #spon content in short video segments while they made quick changes.  In several moments throughout the night, Trixie and Katya addressed us as Wellington, which may seem small, but after weeks and months on tour, I’m sure the nights can blend into one. The small moments, like when they interacted with us as we stomped, suggested to me that they cared about us, and respected us, as a specific audience. They fed off our energy, and we fed off of theirs. And isn’t that the beauty of theatre?

After the show, I eagerly awaited Trixie and Katya’s next episode of their podcast, The Bald and The Beautiful, on which they often shared anecdotes from their travels on tour. Much to my delight, this episode, ‘Bald, Blue, Glowing-Dong Representation on TV’, gave a special shout-out to the TSB Arena for having top-tier air conditioning. This is a badge of honour, as the topic of air conditioning comes up frequently on the pod when they talk about touring. Specifically, them lamenting over venues having terrible A/C, and Katya sharing in graphic detail how much she sweats during the show. However, they sang Wellington’s praises, and despite having no control over the temperature of the venue in any way, I was weirdly very proud. Katya said of the Wellington show, and I quote: “It was the first time in my life I did not sweat a drop on stage, and I was wondering, have I been raptured to heaven?”

On the podcast, they also recalled how one of their dancers was unable to enter Aotearoa because of a worn passport. Subsequently, Katya’s personal trainer, Jason Wimberly (affectionately referred to by Trixie and Katya as simply ‘Wimberly’, or ‘Wimberlina’) stepped in to take their place. As Wimberly wrote on his Instagram, their crew landed in Tamaki Mākaurau at 2:00 am. The next day he learnt the number (in just two hours, according to the podcast!) and performed it that same night in Auckland.

Wimberly also performed at the Wellington show. At the time, it was unbeknownst to me that the original dancer had been replaced. I remained blissfully entertained by all of the dancers. In short, he did an incredible job, especially at such short notice.

I went to the show with two friends. One from high school, who I hadn’t seen in a few months, and my flatmate, a new friend I made since moving to Wellington for university in 2021. I was nervous for it to go well, but we all had such a lovely time together. It was a wonderful mixture of the old and the new, and I felt that during the show itself, too. My life had changed a lot between when I bought the tickets and when the show happened. Particularly through working at a queer bar in Wellington for the past year or so, my appreciation of the multitude of talents and diversity within the drag world had grown tenfold. Indeed, Drag Race was my introduction to this art. However, it has increasingly become only a small part of what drag means to me. I say this not as a drag artist (though, we’ll see what the future holds), but as someone who has been wholly embraced by many people in the Pōneke drag community. It is full of some of the most caring, supportive, and talented people I know, and I’m so grateful to get to call several of them my friends.

I remain a big fan of Trixie and Katya, and I loved their show so much. But afterwards, I went to Ivy Bar and watched Kelly Fornia, Olivia Dreams, King Chloe Tamekehu and more talented Pōneke drag performers in the POC Drag Show, and I adored that, too.

I suppose what I am trying to say here is that, over the past two years, as I have grown, a lot has changed. I transitioned and came out to my immediate family and all my friends as queer and nonbinary; I am now in my second year of study and halfway through my undergrad degree; I’ve had new heartbreak and so many new experiences. Amidst all of that, my relationship with drag, and in proximity, Trixie and Katya, has changed. Their show reminded me that they were a big part of why I started getting interested in drag. From watching their YouTube videos, to Drag Race, to finding Wellington drag artists on Instagram while I still lived in little old Horowhenua, they were a part of how I started to long to move to the big smoke and get involved in the queer community here.

I’ve gone from a teenager looking for something to anchor on, with an admitted infatuation with these two drag queens– and a lot of self-discovery to do– to someone with a greater sense of self and a whole lot more queer joy. Additionally, I hope it is fair to say, I am someone with a greater understanding of drag than I had two years ago. I have huge respect for the craft of drag, and yes, I think Trixie and Katya do it so goddamn well. I know this is all a little sentimental, but I suppose I feel connected to Trixie and Katya. They had an influence on me during a transformative time of my life, and those connections stay with you. The show was a magical way to be reminded of that. 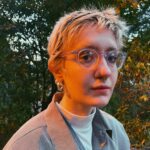 Kat Rowan is a nonbinary Pākeha creative living in Te-Whanganui-a-Tara. They are currently completing a degree majoring in art history and media studies, and they love pop culture. Kat is passionate about queer social justice and trans liberation. In-between times, you’ll catch them watching trashy reality TV and playing their guitar in bed!