My Fake Boyfriend — A Review

When bad apple asked me to review another film, I was hoping it would be Minions: The Rise of Gru. When I found out I wasn’t going to get to see what capers those pesky Minions got up to next I was disappointed, but when I saw that the film was instead a gay rom-com with a hint of Black Mirror vibes I was intrigued.

My Fake Boyfriend (2022) has mixed reviews online, with 4.7/10 on IMDB and 75% on Rotten Tomatoes, but that doesn’t mean it’s not any good. So my partner and I opened a bottle of wine, logged on to their sister’s Amazon Prime account, and sat down to find out for ourselves.

This movie starts with a bop as the opening credits roll, before hitting you with “Buzzfeed Studios Films” in big letters onscreen. When did Buzzfeed start making feature length films? I have no idea. Pop off queen, I guess. The opening credits keep going, and then they keep going some more. This is definitely the longest opening credits scene I’ve seen in a while, and it seems they’re doing the old movie thing of having the entire credits at the start of the film. Its weird that My Fake Boyfriend is the film trying to bring this back, I respect it and I’d like to see more movies these days do it.

Five minutes, we already have a training montage. Andrew’s best friend Jake (Dylan Sprouse) helps Andrew steer clear of Nico, which is essentially all there is to the first half of the plot.

We are taken through the New York City queer dating scene, which is chaotic, vapid, and at times very scary for a character like Andrew and the movie does a great job of showing that, although it also had me bemoaning constantly to my partner about how I wish there were more queer bars and clubs here in Aotearoa.

Dylan Sprouse is perfect as the token straight in these scenes, awkwardly but eagerly dancing along with Andrew at various clubs. His girlfriend Kelly (Sarah Hyland) is also very fun in the chaotic (presumed) bisexual trope.

Jake soon escalates his efforts to keep Andrew away from the very hateable Nico, creating the titular Fake Boyfriend Christiano and posting him all over Andrew’s social media. Andrew is hesitant at first, but Christiano becomes popular online and Andrew reaps the benefits. There’s a delightful green screen scene with Andrew and Jake that is probably the highlight of the movie.

With Jake signing deals with Absolut Vodka on behalf of Christiano and Christiano fake-vacationing around the world, the web of lies quickly gets out of hand for Andrew and Jake, especially as Andrew falls for a drop-dead gorgeous chef called Rafi (Samer Salem) [marry me] but has to pretend he is taken. Both Andrew and Jake make a number of very dubious decisions, and I found myself yelling, “Jesus christ just tell him already”, at the screen.

Kelly and Rafi are the only rational characters at this point, and it becomes frustrating to see Kelly try to pull Jake away from the mess he has created.

The fake boyfriend ruse is shut down with a foolish, but obviously plot-driven, decision and it goes down in spectacular fashion with an all-white BuzzFeed funeral sponsored by Absolut Vodka.

Like countless other rom-coms, this third of the plot would not have happened if the characters involved had just openly communicated with each other. Despite this, and maybe partially because of the wine my partner and I had drunk during the film, I will admit I cried near the end.

The movie ends with a fake ‘where are the now’ freeze-frame bit that i can only describe as Disney Channel Original Movie, but in a good way. I cannot describe this movie as timeless, as the technological and social contexts the plot relies on are very much a product of 2022. Although it doesn’t have any profound answers to them, it does ask some interesting questions. Most importantly though, it had some compelling characters and was honestly a very fun watch. 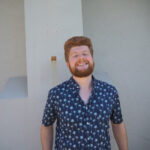 Elliot Weir is the Features Editor of Critic Te Arohi magazine and is doing their MSc in Ecology at the University of Otago in Ōtepoti Dunedin, looking at native geckos as flower pollinators. When not out in the field or in the Critic office, Elliot can be found either making a meal or eating a meal.