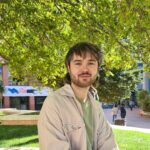 rhys feeney is a high school teacher in Te Whanganui-a-Tara. Their debut chapbook, soyboy, was published in AUP New Poets 7 (2020). They are in love.