This piece was originally posted on Mx. Well’s Medium. You can find the original post at https://medium.com/@mxwellnz.

I want to talk about how this special is incredibly boring. How he’s still talking about the same things he was talking about twenty years ago (fat jokes, AIDs jokes, gay jokes) but even lazier. How his transphobic comedy is less an example of “brave free speech that people are too afraid to say” but more like the most bottom-of-the-barrel transphobic jokes every uncle makes at Christmas. (If you think a joke like “Woman with a penis is gross!” is groundbreaking comedy, happy 10th birthday.) I want to point out how he says “This won’t make it into the special,” after a joke that clearly made it into the special. Cringe. I want to talk about how Ricky is mocking trans people because he knows it’ll create a lot of headlines, but it will not threaten his livelihood.

I wanted to talk about all those things but, while I was writing this, a trans woman was framed for mass murder by Reddit trolls, and right-wing media and politicians repeated that lie. A trans child was then assaulted because of that exact lie. Ricky said “Real life is much worse. These are just jokes. They don’t mean anything.” And I’m sure, to Ricky, this is true. He will never see any consequences apart from some mean tweets, but we will continue to be attacked online and in real life, and why? Because transphobia is so acceptable in polite society, Ricky isn’t even the only comedian to release a transphobic special on Netflix in the last 12 months.

Ricky is a boring, incurious comedian. The next special he does will be a carbon copy of this one. More mean jokes, more cruelty, hiding behind the idea that no subject should be off the table for comedy, but only making jokes about marginalised people. He’ll claim we’re all just too sensitive. Meanwhile, only last year, the entirety of the National Party voted against the ban on conversion therapy, or in more practical terms, they voted against a ban on abusing children for being queer. We are still very much under attack.

When the laziest comedians in the world stop getting cheap laughs by talking about our genitals on stage, then maybe we’ll be closer to a more accepting world. But that doesn’t seem like anytime soon. So no, I did not care for the boring Ricky special. I’ve heard all the jokes before. 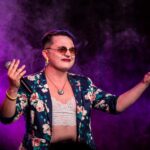 Mx. Well is a transgender non-binary composer comedian based in Pōneke. Their previous work includes the Drag Show For Children The Glitter Garden, songwriting for White Man Behind a Desk: Live, and as sound designer and musical arranger for The Slutcracker, A queer ballet for Christmas.