What it means to be a monster.

When I was young, my family would call me “Mōmoke,” a nickname I still use today. Occasionally, I might run into some distant family member or relative who knew me as a child that can’t remember my name, but remembers “Mōmoke.” It was the name for the little kid with blonde hair, blue eyes, and pasty white skin. A name given to the child running around the beaches to find coconut crabs; or crawling under tables to spot the moko lying there. It’s a name that’s given to monsters.

In Cook Island folklore, the Mōmoke are pale eel creatures from the underworld. They crawl up from deep beneath the earth, swimming through dark rivers and emerging from a tiny underground lake. The legend goes that a farmer catches one of these eel people, falls in love with her, and they have a child with fair skin and hair. Eventually, the Mōmoke explains that she has to return to her dark home, she can’t survive any longer on land and so she dives back into the lake. The farmer, desperate with grief, chases her, drowning in the murky waters as he tries to keep up with her. Their child lives on. It’s a story meant to explain albinism. A story to explain why this blonde child looks nothing like his mother.

When I’m not in the islands, I often find another term used to describe me, “white-passing.” An umbrella term for any person of a different heritage or mixed ethnicity that can “pass” as white in most situations. This experience is never binary of course, there’s no strict definition for what is and isn’t “white.” Trying to figure out the exact distinction between these groups is a folly that relies on colonised, eugenicist ideas of race and identity. Instead, white-passing describes the certain degree of privilege I have compared to my siblings. At its simplest level, I’m not perceived as Rarotongan unless I choose to be.

However, this creates barriers on both sides of my identity. Despite having the same cultural and historical connection as my siblings, I often feel the need to reiterate or explain how I’m Rarotongan. There’s always the caveat of my whiteness. On the other side, there is a disconnect between me and the Pākehā norm. Even if I wanted to pass as white in all situations, I couldn’t. The sight of my family, my full name, hell, even the muttering of “auē tau ē” whenever I sneeze or stub my toe. Even fundamental concepts like death and grief are shaped by my heritage.

It wasn’t until university that I learnt that death is treated as a solemn, personal thing for Pākehā. I sat in a classroom analysing a poem, that to me, was a deep expression of love, and care for someone who has passed. Only for my white peers to read such deep insult and hatred towards the dead in the same text. I didn’t know that it wasn’t the norm to keep the dead company before the funeral, to keep them in your house, in your living room. To chat, joke, and sing with them until they leave. These things are not what I usually talk about when I need to “prove” my Rarotongan identity. Most of the time, I explain my family history, I explain that our family doesn’t speak te reo because my mother was sent to allocution school to lose it, that my grandmother had to move to a new country when she was barely 16, that my family has suffered just like any other despite having a white son.

This is what it means to get your name from monsters. You are never defined by your joy, your capacity to feel and live through your culture; being Pasifika becomes synonymous with misery. You don’t get to be one of us unless you have been wounded like us, because the scars are all that we get to be. It turns having children, growing your family, into an act of cutting a child into pieces. If this is what it means to be a true islander, then the islands can only get smaller, only get swallowed up by the rising seas. If we let ideas of blood quantum, or expectations of the “correct” way to be Pasifika enter into the equation, we hand our futures to the forces that want to erase it. We build restrictions around identity and slowly cage ourselves further.

Even in writing this piece, there’s a part of me saying “your voice doesn’t matter here, stop taking space, stop pretending you know what this means.” Part of that voice is right; I can’t ever speak on my sibling’s experience of being Rarotongan. I can’t make a judgement about whether or not their life is “more” or “less” Rarotongan than mine. But I know, if I let myself live half of a white life; then I deny a future to my family and our history. I make the decision for them, and they can only be less than I am now. Those who come after me would only inherit that voice, and nothing else. We all drown in that pool chasing a pale ghost.

Instead, I don’t think of our identities as anything fixed. We aren’t vessels to be filled with the right amount of blood. We’re bodies, in every sense of the word, we are channels for our lives to flow through us. Our histories, our culture, our identity reaches backwards and flows into our future. The more we open ourselves up to those aspects of our identity, the wider it grows, and in turn, we find even wider ways to express our lives. Just this year, our family has made the decision to learn Te Reo Kuki ‘Airani, to remove the detritus that was blocking the river, and let what it means to be Rarotongan flow from our mouths. The more comfortable we become claiming our history, the more comfortably it can claim us.

I still proudly wear the name “Mōmoke,” because it’s not a monster. It’s a thing that was loved deeply and had to leave to survive. It is a creature that moves easily through channels others can’t swim. It is a thing that always has the promise of returning. Being white-passing does not mean you are half of anything. Your channel simply starts narrower. Your identity only trickles through in small moments. At times, it feels like the only thing that comes through is the trauma, the suffering that leaks through us. We can delude ourselves into thinking that this is all that lies in the river, going back forever is the pain of generations. But this is never the case, it is simply that there is too much joy, love, and hope to come out all at once. 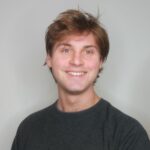 ​​Eamonn Tee was born in Auckland in 1999. Since then he’s managed to make his Rarotongan mother and Pākehā father very proud by graduating from the University of Auckland with first-class honours and having his poetry published across New Zealand billboards by Phantom Billstickers. Eamonn currently resides in Auckland. You can find him writing sad poems and making bad jokes to recover from them on Twitter.