not a lifestyle, research

I Miss You, I Will Never Meet You.

Forming a relationship with a generation of people I will never meet.

Faces flashed like apparitions on a tapestry. Honouring their lives through song and splendour. Famous faces—Freddy, Sylvester, Alvin Ailey, amongst faces of those just like us. Suspended in time, reality was frozen. We were there with them. Greenwich Village, New York City, 1987. The audience was held in reflection. Welcome to the Pleasuredome. In a full face of glittery drag, painted lovingly (every night) by my drag mother, I stood awe-struck with my castmates, paying homage to the legends that lived; inside a replica of the world they once sparkled in, and dressed as they would, evoking their celestial spirits. This was my first AIDS memorial—performing in Pleasuredome the musical at the age of 23 in 2017. This memorial lived and breathed with the memories of lives of those lost. Six nights a week, eight shows a week for four months.

And so began my relationship with a generation of people I will never meet.

The AIDS pandemic defined a generation of queer people and it has affected the lives of almost four generations of queer people. In 2021, access to effective HIV prevention methods such as PrEP (Pre-exposure Prophylaxis) and condoms, as well as a well-socialised understanding that Undetectable = Unstransmittable, allows the younger generation of queer people to live their lives with relative sexual freedom. The shadow and fear of AIDS doesn’t seem to have a hold on our younger communities as it has done intergenerationally for the last four decades. Our freedom is founded upon the lives and experiences of a generation of extraordinary people that we lost to AIDS-related illnesses. Their lives, their sacrifices; taking of experimental treatments, the activism to fight for better rights for people living with HIV and the broader queer community, the fight to educate the world about the realities of living with HIV and AIDS; are all things that can be so easily taken for granted by a younger generation of queer folk.

Reality hit on World AIDS Day Te Rā Mate Āraikore in 2017. I was getting into drag with the help of my drag mother to go and collect at the World AIDS Day Street Appeal for the New Zealand AIDS Foundation Te Tūāpapa Mate Āraikore o Aotearoa. While applying layers of glitter and blush, my drag mother shared memories of friends from years gone by. The nostalgia in their voice was not one I had encountered before. Memories of those who sparkled and glimmered, just like those among us now. These were dear ones that were no longer with us. It was the first time in my life I had seen first-hand, the emotional impact of the AIDS pandemic on someone I loved. Like a spark that ignites a flame, the glowing embers burned inside me, to honour those that had passed and to stand in solidarity with those still living. This was the seed of a dream to work with our communities to deliver this mahi (work), and here I am, four years later, working for The New Zealand AIDS Foundation Te Tūāpapa Mate Āraikore for the last three years.

Tradition set in and the subsequent World AIDS Days were met with storytelling, reminiscing and a transfer of knowledge; fanning the flame to keep the spirit alive of those who I would never meet. The more I got to know them, the more I came to sense the great void of love and light that these people had left behind in our communities.

The New Zealand AIDS Memorial Quilt project originated in December 1988 with the first official unveiling of the project on October 5th 1991. The quilt began as a memorial, but over time developed into an invaluable resource to educate communities around Aotearoa of the realities of living with HIV and AIDS. Made up of 16 blocks of eight quilts and 13 individual panels, representing over 150 names, the quilts have a unique way of humanising the virus. Celebratory in nature, they are non-threatening, perfect to establish enriching kōrero (discussion).

For nearly three years, I have had the great fortune of caring for 13 individual panels from the New Zealand AIDS Memorial Quilt Project. Each panel represents the life, or a collection of lives, touched by HIV and AIDS. Immortalised in fabric shrines, they look over me as I proudly look over them. Kevin, Grant, Leigh, Warren, Alexis. These few names represent the vast majority of elders who through the Quilt Project, I have come to respect, admire, celebrate, and mourn as if they were my own kin. Elders still living sharing their personal connections to these sublime celestial beings connecting the dots between generations.

Every time I perform the ritual of unveiling the quilt panels, gently placing the kawakawa leaves, positioning their plaques that offer the viewer a glimpse into a life bravely lived; I reflect on what it must have been like, to live in the shadow of AIDS in the 1980s and 90s and even in the early 2000s. What valour was embodied by our forefolk, who fiercely marched into the unknown? I am reminded of Alistair Hall, who is featured in Fiona Clark’s photographic album series Living with AIDS 1988. In a letter, Alastair writes “I want to ask you not to be afraid of me or people like me—we have some fear of our own and that is enough to cope with. We want to protect you from this virus.”

Alastair, you have. On behalf of a generation of younger people, thank you for protecting us. We owe you and our queer tūpuna (ancestors) so very much.

Since the beginning of the HIV and AIDS epidemic, 79.3 million people have been infected with HIV and 36.3 million people have died due to AIDS-related illnesses. In modern-day Aotearoa, people living with HIV live long, healthy lives as a result of advancements of treatment over the last 30 years. The virus is no longer the killer, but the stigma is. HIV stigma contributes to significant mental health distress and social exclusion experienced by people living with HIV. Stigma also creates barriers for people to access testing and treatment of HIV, leading to latent infection and late diagnoses.

Not a day goes by, where I don’t think about our queer elders. Those lost, but also those living. The stories passed down, keeping alive the memories of those no longer with us. It is what we do with these memories that counts. Honouring their memories, continuing the fight they fought with such bravery. For many of us, it may feel as though there is no battle to be won. The war still rages—the tactics have changed.

It is our duty, in honouring and upholding the memories of those gone before, as well as standing in solidarity with people living with HIV, to call out HIV stigma when we see it. Use the opportunity to educate people on their language, tone, and treatment and understanding of HIV and AIDS. They aren’t the same thing and should never be treated as such. Wise up, learn about our whakapapa (genealogy) as queer folk, speak to our elders and relish in the transfer of knowledge.

I wonder what Grant, Kevin, Leigh, Warren or Alexis would think if they could see the incredible world we live in? I truly hope that they would feel proud of what their lives have contributed to; they would be joyful that, for the first time in 40 years, there are now generations of young queer folk coming of age where romantic and sexual possibilities are free from the grip of AIDS as a result of well-socialised condom use, increasing PrEP uptake and understanding that Undetectable truly means Untransmissible.

Thank you, mama, for guiding me on this journey; for allowing me to whakawhanaungatanga (establish relationships) with people I will never meet. Every day is a new opportunity to deepen the connection between ourselves and a generation of incredible thinkers, artists, activists, and celestial superstars. Pass on the mātauranga (knowledge). Never let their memories fade. To Grant, Kevin, Leigh, Warren, Alexis, Alastair, and all those who have gone before—thank you. Perhaps we will meet, someday.

The New Zealand AIDS Memorial Quilt consists of 16 quilt blocks in total, most consisting of 8 panels stitched together. Each panel represents a person who died of AIDS, and was made by family members, partners and/or friends. The Quilt is supported by an archive, held at Te Papa Archives.

World stats on people living with AIDS, on retrovirals, and more. 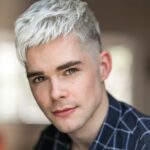 Born and raised in Tāmaki Makaurau, Blaise is a non-binary Pākehā member of the rainbow community. Following a career as a performing artist for the better part of a decade, Blaise has worked at the New Zealand AIDS Foundation Te Tūāpapa Mate Āraikore o Aotearoa for the last three years, in various roles across Community Engagement and Social Marketing.