i am a SWAT member
breaking in through the perfectly curated glass window
of a basement theatrette, a small bar off the main drag
armed with:
insufferable pastiche
more R-rated innuendos than you can possibly afford
punishment fetishes
metaphors about Napalm over my perfectly waxed butthole
agent orange up in my boy pussy
playing war games with straight men because I know what it is to dare to live

i am a vortex mega howler
flying through the air
screaming in free verse:
a drone strike with camp flair
all the while reckoning with the fact that
if the world is going to hate me for being queer
then I might as well make a weapon out of myself.

poetry for me is not so much of a liberation as it is delicious shrapnel
i can rip apart everything you think you know about me
and ungraciously throw it back
in your face.

i am a bejewelled finger hovering over the Big Red Button
a thousand words like cluster munitions threatening: “I’ll cut you up, bitch!”

vindictiveness, in this sense, then, is self-selecting
and so I’m left butt-fucking on a massive pile of Plutonium while Daddy Manhattan watches.

These are my unconditional terms of your surrender: no more dead faggots.

fuck me with your atom bomb
while improbably draped in an original Bob Mackie gown:
i am, like, totally covered with your sparks –
fireflies in the morning rain
and realising that that old dead faggot was onto something, y’know!

with one stilettoed heel in front of the other, He cries
I can walk!
I can walk! 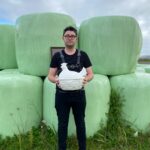 Ted Greensmith-West is a 20-something-year-old writer and solicitor based in Tāmaki Makaurau, specialising in human rights and Te Tiriti ō Waitangi law. His writing seeks to embrace the dark, the camp and the queer experience. He is currently working on his first collection of poems.