“Science itself does not colonise.”

— Inventory of His Majesty’s Bark the Endeavour in preparation for its Royal Academy commissioned voyage of scientific discovery in the Pacific.

Pope Gregory would call it the 10th of June, but long before Cook strayed over a not yet existent dateline, we called it the first day of Pipiri. The first new moon since the reappearance of Matariki.

There is a unique indignity to being colonised.

I usher in the new year alone with the moonless sky. Happy New Year to me. I can feel my maunga calling me.

I’m a good three weeks ahead of the government-sanctioned Matariki celebrations. I don’t know how they worked it out, but I’m of Te Tai Tokerau, we can already see Tāwhirimātea’s damaged eyes, even if you can’t. The Northern Tide will outlast all and we have no fear of the dark.

I imagine in just a little over a years’ time, the Briscoes lady telling me to wrap up warm this Matariki with 30% off electric blankets! I see the promotions folder of my inbox filling with Matariki savings on all socks, hosiery, sleepwear, and underwear (exclusions apply).

There is a unique indignity in being a minority on your own whenua.

A few hours ago, I completed an application for a research grant. Pleading for money to visit my haukāinga. I spend a lot of my time begging these days, my eyes downcast; bowl outstretched. Buses don’t go to the Utakura or Waimā Valleys, and I can’t drive.

I saw an old picture of the railway lines that used to crisscross Te-Ika. Back when trains ran as far north as Okaihau. From there I could walk down the gravel Horeke Road and home.

I promise that I won’t let another year go by without returning to my maunga.

I just want to be able to go home.

You might call it the eleventh of July, but to me and mine, it’s the second day of Takurua, named for Sirius, the brightest star in the sky.

Māhina is the most slender waxing crescent. An aggressively clipped fingernail.

Demand the debate! You scream at me.

What used to be an airhorn to the face has lost potency over time.

A blip in the background static of microaggressions we tune out to make it through the day.

Educate me! (Within reason, nothing I don’t want to hear.)

I no longer waste time defending my existence. The defining trait of human rights is that they apply to me not for being nice and compliant in the face of my own genocide. But for being human.

But I can’t call it white supremacy. That’s me shutting down the debate I didn’t ask for.

The most abuse I get is for pointing out this colony is in fact a colony.

For pointing out the turd in the punchbowl.

The messenger you’re not content to shoot but to degrade and torture.

Because colonisation is punitive.

We were happily drinking this punch until YOU ruined it for us!

Today the EMA bemoaned the low unemployment rate, saying the quiet part out loud, that they have less power to exploit. That it’s harder to justify their starvation wages. That they were always a warning to the marginalised.

This could be you. This WILL be you. Fear this.

Benefits can’t be enough to live on. They can’t be a viable option. We can’t be comfortable, let alone allowed to thrive.

They restrict our ability to help ourselves. Earn more than $168 from other sources? CUT OFF!

They restrict our relationships. You’re in a relationship? CUT OFF! You’re THEIR burden now.

How dare you need help?

How dare you ask for more, as if beggars suddenly CAN be choosers?

Need warm clothes? Just do without I suppose.

Treat yourself occasionally? Fuck off, don’t you know poor people don’t deserve nice things? You will take these crumbs and you will be grateful.

Be the correct sort of victim.

Need dental work? I dunno. Die, I guess. As if that hasn’t always been our endgame.

The final goal of colonisation is an ethnostate.

You deserve to die for removing yourself from the pool of human resources we can exploit.

Your head will be mounted over the doorway of your local Department of Social Services to remind everyone who passes of their eventual fate.

Between the waxing crescent and the first quarter comes the tumultuous Tamatea.

My two irāmutu both have RSV and barks like fur seals.

I help one of them to blow his nose.

“Does that feel better?” I ask.

“Not much better,” he replies.

I’ve grown to dread Fridays, when I can’t avoid the misogynists and harassers outside of the hospital. They always claim they’re trying to change minds. To offer support.

HERE TO HELP! NOT TO HARASS!

Today is the supposed howl of a protest.

If my understanding is correct, exploiters of stolen land are howling for their right to pollute our whenua, our awa, our Ao.

What a cool society you’ve boxed me into.

While I scramble to uphold my end of the social contract, you take that contract and maintain steady eye contact while wiping your arse with it.

I take a long, hard look at my life and my choices. At my brain and its gasping neurotransmitters. At my thoughts and how I’ve wired and rewired them at the whim of your shifting goalposts.

And I’ve decided that it’s not me, it’s you.

You’ve been the problem all along.

Is that hard to hear?

Does that make you uncomfortable?

Is the mean, scary, Māori man upsetting you?

Are you hurt by my mean words, eked out through a mouthful of blood as your full weight is held by your tasteless heel firmly on my adam’s apple?

That must be really tough for you.

My app says we’re already at Takirāu. My eyes tell me the waning gibbous is still at Rakau-matohī. A tiny black smear over Māhina’s left eyebrow. The energy feels more like the treacherous Oike.

Because I can’t seem to ignore this one.

Just say you hate us and be done with it.

It would save us a lot of time.

Instead, you make me repeat the same points again and again.

Toni Morrison said it best. You’re wasting my time. Distracting me from our real goal, which has never faltered.

Our sovereignty was never in question. We declared it to the world in He Wakaputanga, but it was a mere formality. Us playing by your rules.

Now, read the false document your government claims as the treaty and tell me with a straight face that we signed that.

Look into my eyes and tell me that we knowingly and willingly signed away our inalienable rights to a white woman on the other side of the world.

Call us that ignorant.

Call us that stupid.

Call me a savage.

39 Rangatira signed the document you used to rob me of almost two centuries of wealth and they all believed they were signing the real thing.

Tell us how little you think of us and our decision making.

Tell us that we waited every day with bated breath for five hundred years. Waiting for a noble group of Europeans to civilise us. To show us how to productively work the land we’re so wastefully using. To turn our trees into butter boxes. To slaughter our ancestor whales and take their clean-burning oil back to Europe to light your lamps and lubricate your delicate machinery.

To take the burden of Tino Rangatiratanga away from us and cradle us in her pillowy, white bosom.

You can’t. Not without believing you’re inherently better than us.

I’m the real racist for pointing out your racism.

Oh no, have I hurt your feelings again?

We make things complicated. We pick at wounds you pretend not to see. We point out blemishes you’ve tried to conceal. We remind you of your obligations and how poorly you’re living up to them.

Easier to dress me in a suit and parade me around like a dog walking on its hind legs.

Look what Māori can achieve when they put their mind to it! Look at my tamed savage being led around by a chain around his neck!

And when I outlived my usefulness, when I used my chain to make noise, to rattle relentlessly against the bars of my cage, you tried to kill me.

Through violence. Through neglect and ill-health.

If you don’t have the decency to die, can’t you at least be quiet?

Somewhere in every estuary, where the outgoing current meets the incoming tide, where the freshwater meets salt, there is a brackish point where the salinity of the water matches my blood. But I wouldn’t expect you to understand that.

Before you discovered DNA and long before epigenetics, we said that we were literally our ancestors.

Before there were karyotypes and TERFs, we lived outside of your stark binaries.

I remember when your science searched my blood for warrior genes but didn’t go looking for coloniser genes in yours.

I remember when you tried to isolate gay genes for prenatal testing to abort your genetic dead-end before they can pollute the culture any further.

I arrived on this whenua aboard Ngātokimatawhaorua, the re-adzed waka of Kupe himself. A voyage comparable to the moon landing.

We are not the same.

There is maunga that knows my name and knows my soul and the pull to her is like the pull of the moon on water.

I won’t let you homogenise me any further.

Why would you want me to be anyone else when I could be me?

There’s a unique grief to being colonised.

Seeing a world that could have been. A promise unfulfilled. Always being on the sucker’s end of the deal.

But our fate was decided long ago.

When a Royal Navy Captain was put in charge of a scientific voyage of discovery with ten cannons, twelve swivel guns and a bellyful of muskets.

When he set out from Tahiti to Aotearoa, it wasn’t to go or to see, it was to conquer.

It barely matters what Te Tiriti says when one end never had any intention of living up to it.

There’s a unique indignity to being colonised.

Would Australia put the Ruby Princess on their 50-cent coin?

Would Samoa welcome a replica of the SS Talune into Apia Harbour?

That would be grotesque. A sick joke.

But as a replica of Cook’s death ship was welcomed back into Te-Whanganui-a-Hei, I was once again the doomed messenger.

There isn’t just a turd in the punch bowl. It was steaming diarrhoea the entire time.

And you were drinking it happily.

The slump between the waning gibbous and the frantic energy of Tangāroa to follow.

The year is less than two months old and I’m already so tired.

But the void is also the realm of limitless potential being.

There is a unique joy to being Indigenous.

When our bare feet touch the mud and grass of our maunga.

When we feel the cleansing breath of Tāwhirimātea.

When we feel the water of our awa and moana wash away the filth and ugliness of this colony.

Maybe I understand you a little more, now.

I can’t imagine a life without that feeling, fleeting as it always is.

I will return to my maunga.

I won’t let you dim the unwavering beam of light inside of me.

What will you do? 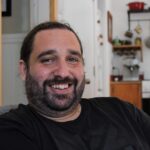 J. Wiremu Kane lives and writes on the unceded lands of Ngāti Hei and Ngāti Maru. He likes to put words together in ways he probably shouldn’t. Through his work he aims to make colonists regret forcing him to learn the English language.
He is the 2022 Emerging Māori Writer in Residence at the International Institute of Modern Letters.