not a lifestyle, review

Melissa thinks she’ll have to keep this a secret forever. Then her teacher announces that their class play is going to be Charlotte’s Web. Melissa really, really, REALLY wants to play Charlotte. But the teacher says she can’t even try out for the part… because she’s a boy.

With the help of her best friend, Kelly, Melissa comes up with a plan. Not just so she can be Charlotte — but so everyone can know who she is, once and for all.

“George stopped. It was such a short, little question, but she couldn’t make her mouth form the sounds. Mom, what if I’m a girl?”

I love this book. It is a sweet and lovely wee book that takes some big ideas around gender and makes them easily digestible for a younger audience.

My nine-year-old nibling read this book and when I asked them what they thought I got an “It was good,” as a response so I thought perhaps some of the ideas went over their head.

During the Olympics, with the public discourse about Laurel Hubbard, the word “transgender” came up and I thought it was going to be a bigger conversation. But after explaining the definition of the word, they looked at me and said “Oh, she’s like Melissa! Cool!” and then delved into an unrelated conversation about Minecraft. You couldn’t wipe the smile off my face that day (even after enduring the following 40 minutes of facts about mobs of cows and different island terrains).

As an enby adult, my favourite thing is that this book isn’t turned into a lesson on accepting trans kids. It isn’t designed to be emotionally cathartic. Instead, it deals with the quiet sadness, frustration and loneliness of being a girl in a world where no one else can see it. The thing with being an LGBTQIA+ kid is that home isn’t always a refuge or a safe space and I think that this book explored that idea in a gentle way. At home, Melissa has a mother that doesn’t get it and a brother that kind of does but she finds family in her best friend who not only understands, but is everything you want an ally to be.

I love that Melissa has the correct pronouns from the first page as that is how she sees herself. It is an age-appropriate explanation of what it means to be trans and how to create a supportive environment around yourself.

As you can see from the title, the book used to be called George which is Melissa’s deadname. In the author interview at the end of the book, Alex Gino says that they never meant for the book to be called the very name that Melissa never wants to hear again. When they were writing they called it Girl George (as a play on Boy George) and their editor suggested George because kids wouldn’t necessarily get the reference. Gino calls the book “Melissa’s Story” and on social media has encouraged the art of correcting the book’s cover using #sharpieactivism on Twitter (some of them have been incredible!). It has been announced recently that six years after the original was published, Scholastic is going to be reprinting the book with the title Melissa in 2022.

The announcement brought up an interesting conversation as a bookstore owner that stocks the book. We downloaded our own printable cover stickers from the Scholastic website and looked at our stack of George books. We didn’t want to take away from a reader editing the cover in a creative way and we definitely do not want to get on the wrong side of book purists. But we also abhor deadnaming so we settled on including the stickers with every purchase.

The good news is Melissa isn’t a real person, so we can’t hurt her feelings. And if we feel uncomfortable talking about this book called George with a main character Melissa, that discomfort offers some insight into a common trans experience.

Using a person’s true name and pronouns can be a lifesaving action and I am glad that Melissa’s story is getting the same treatment.

This book is a sensitive, honest and important story, no matter what your age is.
Melissa (previously published as George) is available to purchase from Alphabet Book Club. Thank you for supporting a queer-owned local business. 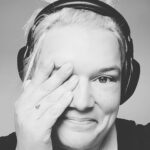 Chelsea is the Book Master at Alphabet Book Club—this means she is responsible for reading and curating the stock, designing images full of rainbows and being chaotically enthusiastic about queer literature on social media. You can find out more about them and the rest of the team at alphabetbookclub.nz.